Since commits in lakeFS are immutable, they are easy to store on an immutable object store.

Older commits are rarely accessed, while newer commits are accessed very frequently, a tiered storage approach can work very well - the object store is the source of truth, while local disk and even RAM can be used to cache the more frequently accessed ones.

Since they are immutable - once cached, you only need to evict them when space is running out. There’s no complex invalidation that needs to happen.

In terms of storage format, commits are be stored as SSTables, compatible with RocksDB.

SSTables were chosen as a storage format for 3 major reasons:

Each lakeFS commit is represented as a set of contiguous, non-overlapping SSTables that make up the entire keyspace of a repository at that commit.

lakeFS metadata is encoded into a format called “Graveler” - a standardized way to encode content-addressable key value pairs. This is what a Graveler file looks like: 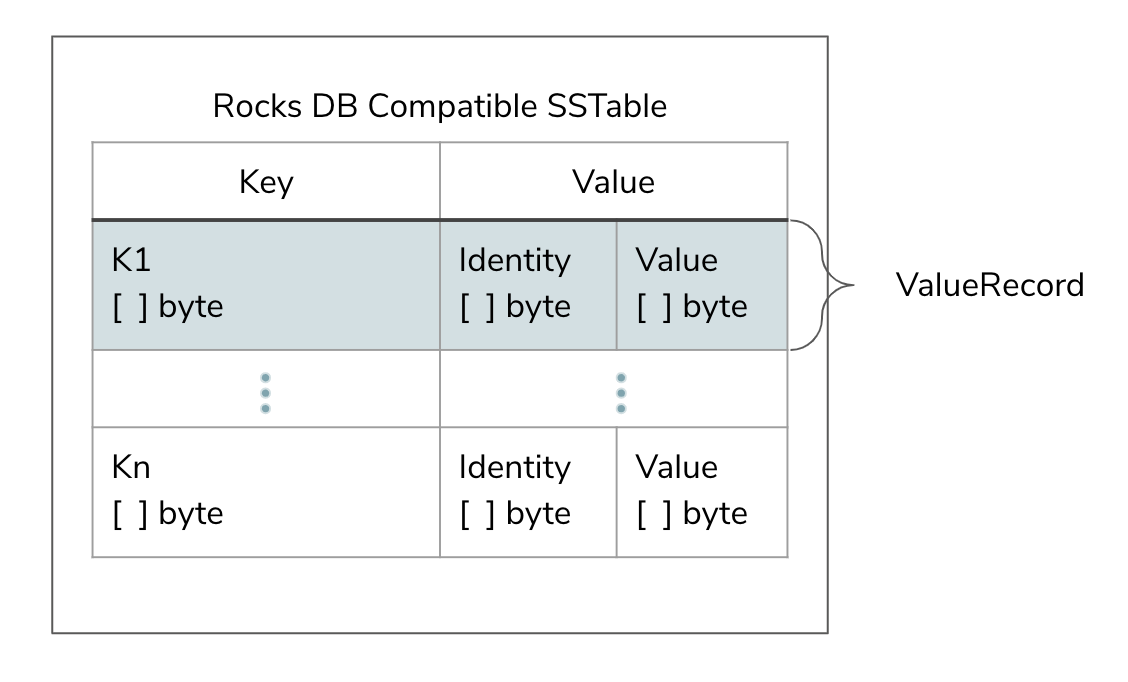 Each Key/Value pair (“ValueRecord”) is constructed of a key, identity, and value.

A simple identity could be, for example, a sha256 hash of the value’s bytes. It could be any sequence of bytes that uniquely identifies the value. As far as the Graveler is concerned, two ValueRecords are considered identical if their key and identity fields are equal.

A Graveler file itself is content-addressable, i.e., similarly to Git, the name of the file is its identity. File identity is calculated based on the identity of the ValueRecords the file contains:

Constructing a consistent view of the keyspace (i.e., a commit)

We have two additional requirements for the storage format:

To support these requirements, we decided to essentially build a 2-layer Merkle tree composed of a set of leaf nodes (“Range”) addressed by their content address, and a “Meta Range”, which is a special range containing all ranges, thus representing an entire consistent view of the keyspace: 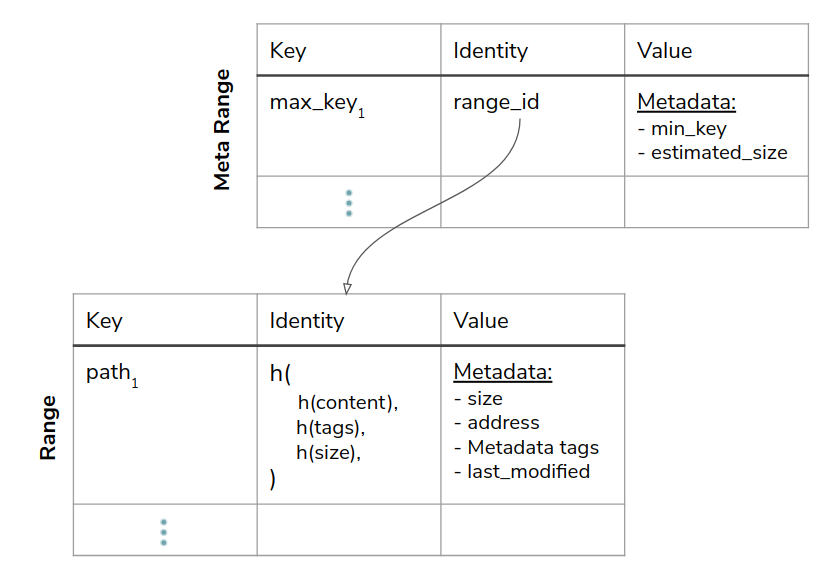 Assuming commit B is derived from commit A, and only changed files in range e-f, it can reuse all ranges except for SSTable #N (the one containing the modified range of keys), which will be recreated with a new hash representing the state as exists after applying commit B’s changes. This will, in turn, also create a new Metarange since its hash is now changed as well (as it is derived from the hash of all contained ranges).

Assuming most commits usually change related objects (i.e., that are likely to share some common prefix), the reuse ratio could be very high. We tested this assumption using S3 inventory from 2 design partners - we partitioned the keyspace to an arbitrary number of simulated blocks and measured their change over time. We saw a daily change rate of about 5-20%.

Given the size of the repositories, it’s safe to assume that a single day would translate into multiple commits. At a modest 20 commits per day, a commit is expected to reuse >= 99% of the previous commit blocks, so acceptable in terms of write amplification generated on commit.

On the object store, ranges are stored in the following hierarchy:

Note: This relatively flat structure could be modified in the future. Looking at the diagram above, it imposes no real limitations on the depth of the tree. A tree could easily be made recursive by having Meta Ranges point to other Meta Ranges - and still provide all the same characteristics. For simplicity, we decided to start with a fixed 2-level hierarchy.

lakeFS always stores the object data in the storage namespace in the user’s object store, committed and uncommitted data alike.

However, the lakeFS object metadata might be stored in either the object store or a key-value store.

Unlike committed metadata which is immutable, uncommitted (or “staged”) metadata experiences frequent random writes and is very mutable in nature. This is also true for “refs” - in particular, branches, which are simply pointers to an underlying commit, are modified frequently: on every commit or merge operation.

Both these types of metadata are not only mutable, but also require strong consistency guarantees while also being fault tolerant. If we can’t access the current pointer of the main branch, a big portion of the system is essentially down.

Luckily, this is also much smaller set of metadata compared to the committed metadata.