lakeFS can run on MacOS and Linux (Windows binaries are available but not rigorously tested - we don’t recommend deploying lakeFS to production on Windows). x86_64 and arm64 architectures are supported for both MacOS and Linux.

If using only the metadata APIs (for example, only using the Hadoop/Spark clients), network bandwidth is minimal, at roughly 1Kb per request.

lakeFS greatly benefits from fast local disks. A lakeFS instance doesn’t require any strong durability guarantees from the underlying storage, as the disk is only ever used as a local caching layer for lakeFS metadata, and not for long-term storage. lakeFS is designed to work with ephemeral disks - these are usually based on NVMe and are tied to the machine’s lifecycle. Using ephemeral disks lakeFS can provide a very high throughput/cost ratio, probably the best that could be achieved on a public cloud, so we recommend those.

A local cache of at least 512 MiB should be provided. For large installations (managing >100 concurrently active branches, with >100M objects per commit), we recommend allocating at least 10 GiB - since it’s a caching layer over a relatively slow storage (the object store), see Important metrics below to understand how to size this: it should be big enough to hold all commit metadata for actively referenced commits.

lakeFS uses a PostgreSQL instance to manage branch references, authentication and authorization information and to keep track of currently uncommitted data across branches.

The dataset stored in PostgreSQL is relatively modest, as most metadata is pushed down into the object store. Required storage is mostly a factor of the amount of uncommitted writes across all branches at any given point in time: in the range of 150 MiB per every 100,000 uncommitted writes.

We recommend starting at 10 GiB for a production deployment, as it will likely be more than enough.

Since the data size is small, it is recommended to provide enough memory to hold the vast majority of that data in RAM: Ideally configure shared_buffers of your PostgreSQL instances to be large enough to contain the currently active dataset. Pick a database instance with enough RAM to accommodate this buffer size, at roughly x4 the size given for shared_buffers (so for example, if an installation has ~500,000 uncommitted writes at any given time, it would require about 750 MiB of shared_buffers, that would require about 3 GiB of RAM).

Cloud providers will save you the need to tune this parameter. It will be set to a fixed percentage the chosen instance’s available RAM (25% on AWS RDS, 30% on Google Cloud SQL).

Scaling lakeFS, like most data systems, moves across 2 axes: throughput of requests (amount per given timeframe), and latency (time to complete a single request).

Most lakeFS operations are designed to be very low in latency. Assuming a well tuned local disk cache (see Storage above), most critical path operations (writing objects, requesting objects, deleting objects) are designed to complete in <25ms at p90. Listing objects obviously requires accessing more data, but should always be on-par with what the underlying object store can provide, and in most cases, it is actually faster. At the worst case for directory listing with 1,000 common prefixes returned, expect a latency of 75ms at p90.

Managing branches (creating them, listing them and deleting them) are all constant-time operations, generally taking <30ms at p90.

Committing and merging can take longer, as they are proportional to the amount of changes introduced. This is what makes lakeFS optimal for large Data Lakes - the amount of changes introduced per commit usually stays relatively stable, while the entire data set usually grows over time. This means lakeFS will provide predictable performance: committing 100 changes will take roughly the same amount of time whether the resulting commit contains 500 or 500 million objects.

Scaling throughput depends very much on the amount of CPU cores available to lakeFS. In many cases it is easier to scale lakeFS across a fleet of smaller cloud instances (or containers) than it is to scale up with machines that have many cores, and in fact, lakeFS works well in both cases. Most critical path operations scale very well across machines.

All benchmarks below were measured using 2 x c5ad.4xlarge instances on AWS us-east-1. Similar results can be achieved on Google Cloud using a c2-standard-16 machine type, with an attached local SSD. On Azure, a Standard_F16s_v2 virtual machine can be used.

The PostgreSQL instance that was used is a db.m6g.2xlarge (8 vCPUs, 32 GB RAM). Equivalent machines on Google Cloud or Azure should yield similar results.

The example repository we tested against contains the metadata of a large lakeFS installation, where each commit contains ~180,000,000 objects (representing ~7.5 Petabytes of data).

This test generates random read requests to lakeFS, in a given commit. Paths are requested randomly from a file containing a set of preconfigured (and existing) paths.

Average throughput during the experiment was 10851.69 requests/second

This test generates random write requests to a given lakeFS branch. All paths are pre-generated and do not overwrite each other (as overwrites are relatively rare in a Data Lake setup).

Average throughput during the experiment was 7595.46 requests/second

This test creates branches from a given reference

Average throughput during the experiment was 7069.03 requests/second

lakeFS exposes metrics using the Prometheus protocol. Every lakeFS instance exposes a /metrics endpoint that could be used to extract them.

Here are a few notable metrics to keep track of when sizing lakeFS:

Below are a few example architectures for lakeFS deployment

Use case: Manage Machine learning or algorithms development. Use lakeFS branches to achieve both isolation and reproducibility of experiments. Data being managed by lakeFS is both structured, tabular data; as well as unstructured sensor and image data used for training. Assuming a team of 20-50 researchers, with a dataset size of 500 TiB across 20M objects.

Environment: lakeFS will be deployed on Kubernetes managed by AWS EKS with PostgreSQL on AWS RDS Aurora

Sizing: Since most of the work is done by humans (vs automated pipelines), most experiments tend to be small in scale, reading and writing 10s to 1000s of objects. The expected amount of branches active in parallel is relatively low, around 1-2 per user, each representing a small amount of uncommitted changes at any given point in time. Let’s assume 5,000 uncommitted writes per branch = ~500k.

To support the expected throughput, a single moderate lakeFS instance should be more than enough, since requests per second would be on the order of 10s to 100s. For high availability, we’ll deploy 2 pods with 1 CPU core and 1 GiB of RAM each..

Since the PostgreSQL instance is expected to hold a very small dataset (at 500k, expected dataset size is 150MiB (for 100k records) * 5 = 750MiB). To ensure we have enough RAM to hold this, we’ll need 3 GiB of RAM, so a very moderate Aurora instance db.t3.large (2 vCPUs, 8 GB RAM) will be more than enough. An equivalent database instance on GCP or Azure should give similar results. 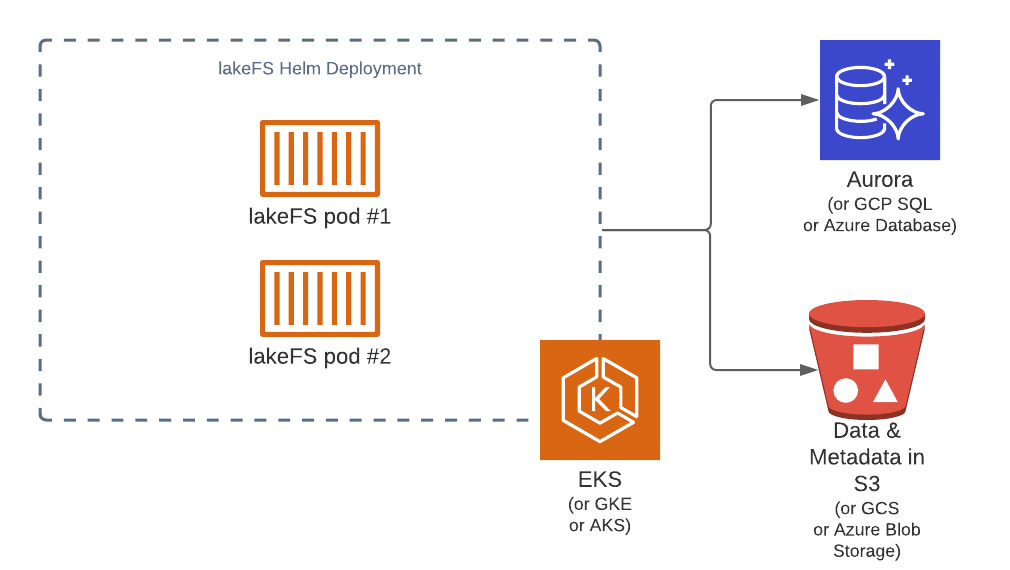 Environment: lakeFS will be deployed on Kubernetes managed by AWS EKS with PostgreSQL on AWS RDS

Sizing: Data pipelines tend to be bursty in nature: reading in a lot of objects concurrently, doing some calculation or aggregation and then writing many objects concurrently. The expected amount of branches active in parallel is high, with many Airflow DAGs running per day, each representing a moderate amount of uncommitted changes at any given point in time. Let’s assume 1,000 uncommitted writes/branch * 2500 branches = ~2.5M records.

To support the expected throughput, looking the benchmarking numbers above, we’re doing roughly 625 requests/core, so 24 cores should cover our peak traffic. We can deploy 6 * 4 CPU core pods. 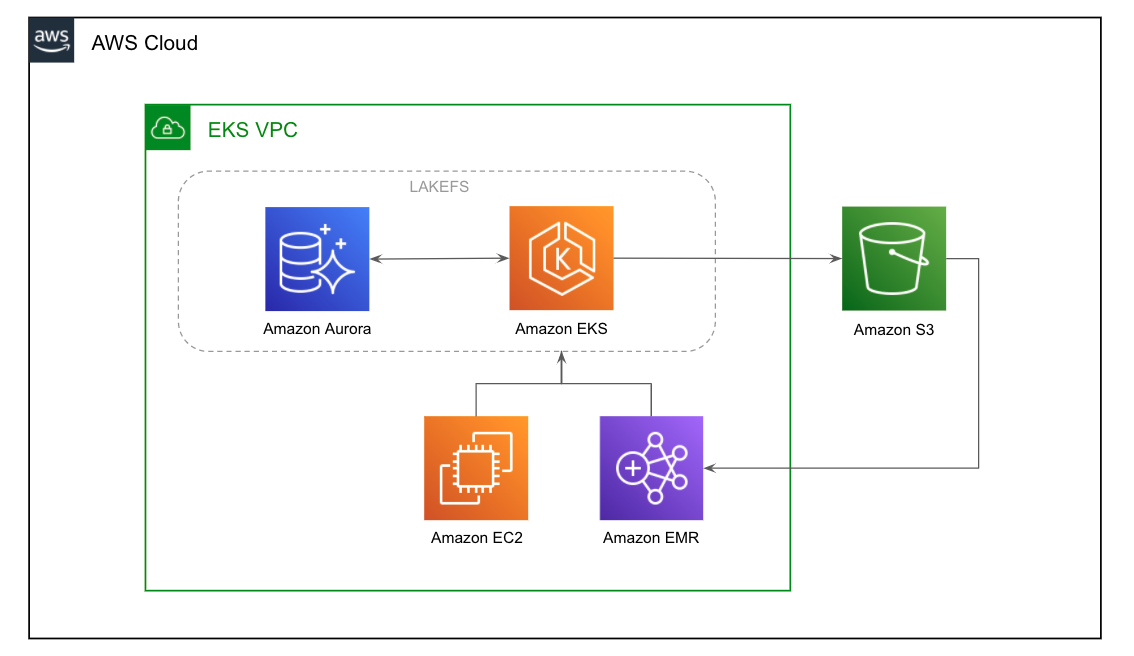