Like other version control systems, lakeFS allows the configuration of Actions to trigger when predefined events occur.

Hooks are managed by Action files that are written to a prefix in the lakeFS repository. This allows configuration-as-code inside lakeFS, where Action files are declarative and written in YAML.

An Action is a list of Hooks with the same trigger configuration, i.e. an event will trigger all Hooks under an Action, or none at all. The Hooks under an Action are ordered and so is their execution. A Hook will only be executed if all previous Hooks that were triggered with it, had passed.

A Hook is the basic building block of an Action. Failure of a single Hook will stop the execution of the containing Action and fail the Run.

Schema of the Action file:

Note: lakeFS will validate action files only when an Event occurred.
Use lakectl actions validate <path> to validate your action files locally.

A Run is an instantiation of the repository’s Action files when the triggering event occurs. For example, if our repository contains a pre-commit hook, every commit would generate a Run for that specific commit.

lakeFS will fetch, parse and filter the repository Action files and start to execute the Hooks under each Action. All executed Hooks (each with hook_run_id) exists in the context of that Run (run_id).

For example, lakeFS will search and execute all matching Action files with the prefix lakefs://repo1/feature-1/_lakefs_actions/ on:

OpenAPI endpoint and lakectl expose the results of Runs execution per repository, branch, commit and specific Action. The endpoint also allows to download the execution log of any executed Hook under each Run for observability.

There are 2 types of files that are stored in the metadata section of lakeFS repository with each Run:

Note: Metadata section of a lakeFS repository is where lakeFS keeps its metadata, like commits and metaranges. Metadata files stored in the metadata section aren’t accessible like user stored files.

Currently, there are two types of Hooks that are supported by lakeFS: Webhook and Airflow.

A Webhook is a Hook type that sends an HTTP POST request to the configured URL. Any non 2XX response by the responding endpoint will fail the Hook, cancel the execution of the following Hooks under the same Action. For pre_* hooks, the triggering operation (commit/merge) will also be aborted.

Warning: You should not use pre_* webhooks for long-running tasks, since they block the performed operation. Moreover, the branch is locked during the execution of pre_* hooks, so the webhook server cannot perform any write operations (like uploading or commits) on the branch.

Upon execution, a webhook will send a request containing a JSON object with the following fields:

Airflow Hook triggers a DAG run in an Airflow installation using Airflow’s REST API. The hook run succeeds if the DAG was triggered, and fails otherwise.

lakeFS will add an entry to the Airflow request configuration property (conf) with the event that triggered the action.

It’s sometimes easier to start experimenting with lakeFS webhooks, even before you have a running server to receive the calls. There are a couple of online tools that can intercept and display the webhook requests, one of them is Svix. 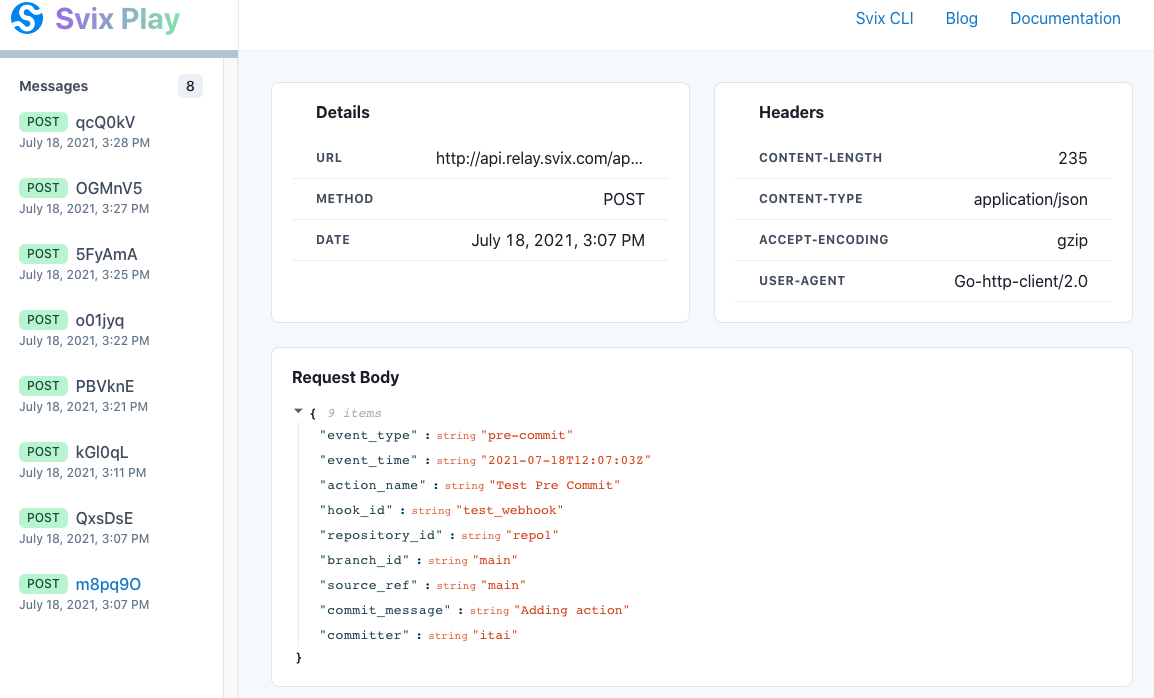